I grew up eating Gulpea, Afghan cauliflower curry, a dish my mom would throw together as an after thought on a weeknight after a busy day’s work of taking care of us. In Afghanistan, any dish that doesn’t have meat is not worthy of being served to guests (unless they’ve overstayed their welcome) and never at parties. However, until recently, the poor treatment of cauliflower in the United States…soggy and grey, served in a compartment of a hospital dinner plate or offered raw on an all you can eat salad bar, is probably even worse.

According to a Time Magazine article, “Cauliflower used to be a boring vegetable. When chef Eric Ripert was growing up in France, he saw it as something to buy only when “there was nothing else on the shelf..”

In fact, the first time I wrote a post about cauliflower, I started it with this apologetic sentence…So, if you have a head of cauliflower that you don't know what to do with it, give this recipe of gulpea a try.  You will be surprised by its flavors and it will likely be a hit with your kids.

Thanks to all the vegans, vegetarians, gluten-free, and carb-adverse healthy eaters, cauliflower has become the ‘it’ alternative to white rice and pasts. Now, literally every restaurant in San Francisco has cauliflower on their menu - fried, roasted, sautéed and lathered with exotic sauces.

Afghan cauliflower, gulpea curry is tender with delicious flavors of turmeric, coriander, and curry powder and goes well with meat, such my lamb with cinnamon kebab, as a side. This dish can be prepared in fifteen minutes in an InstantPot but you can easily make it on the stove and I’ve included instructions for stove top cooking below. I serve gulpea with a side of brown rice, Afghan white rice challaw, or stuffed inside a pita bread with a drizzle of yogurt.

According to my friend Ghulam Qader Popal, whom I consider an expert on Afghanistan, cauliflower originated in the Mediterranean, traveling from Portugal through the Indian Subcontinent and landing in Jalalabad, a city in eastern Afghanistan. It’s easy to see the Indian culinary influence in this recipe. Almost the entire supply of gulpea still comes from mild-weathered Jalalabad. But growers can also be found in Qunduz, Helmand, and Kandahar Province. The most lucrative farming product in these regions, of course, remains the poppy seed.

According to the Medical News, cauliflower is full of antioxidants, Vitamins, and fiber. When you cook it in an Instant Pot it preserves all these wonderful nutrients and you don’t have to use too much oil to bring out the flavor.

That bit of trivia aside, the end result of this recipe is a mild but flavorful side dish which I hope you will try. 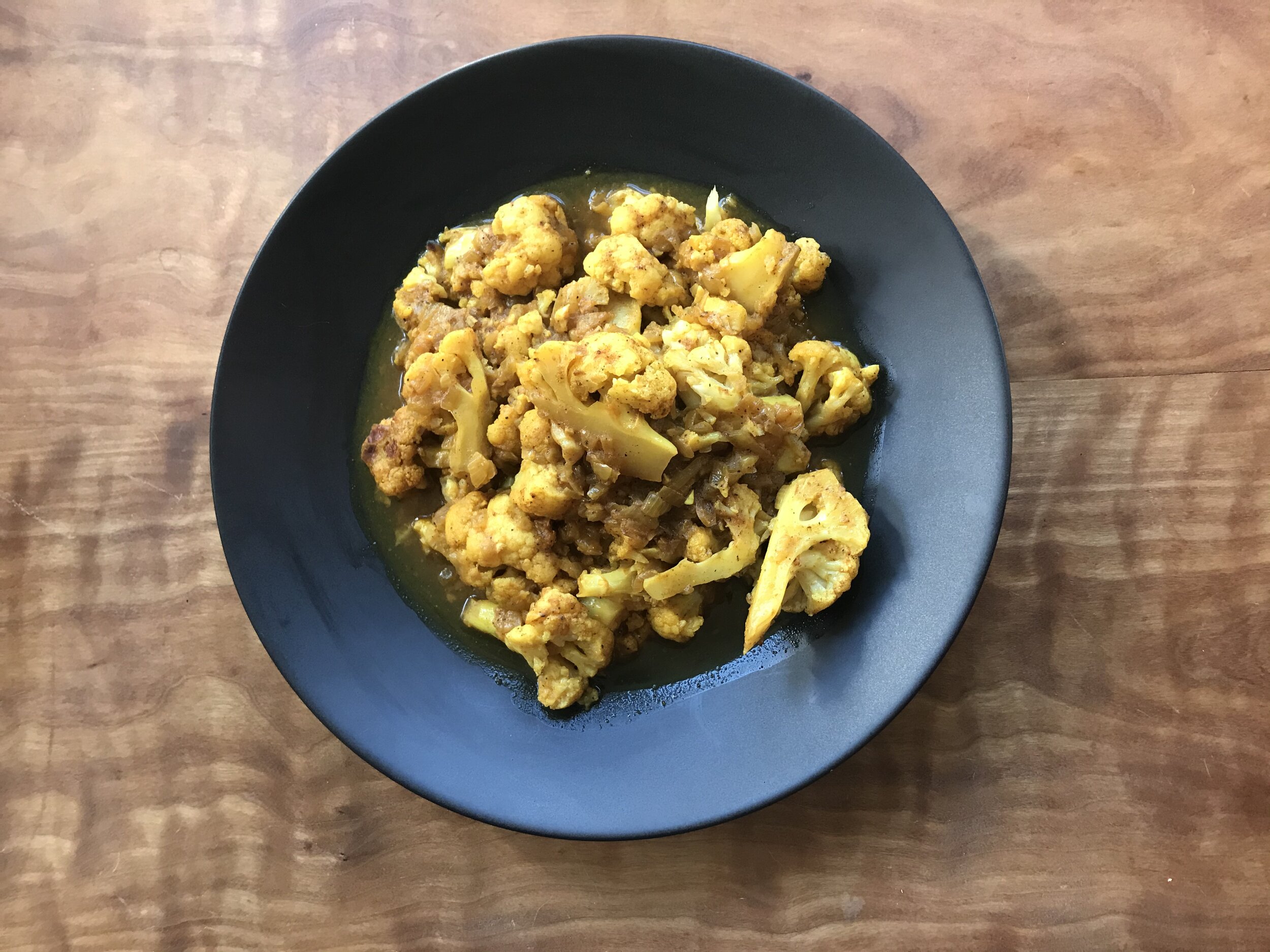 Press the Saute’ button on your Instant Pot. Once heated, add olive oil and onions. Cook, stirring occasionally until onions are translucent, around three minutes. Add all the spices, stir for a minute and let the flavors bloom. Add all the other ingredients, stir really well so every cauliflower is coated with the spice mixture. Put Instant Pot lid on, use the pressure cook button and set to pressure cook on low for five minutes.

Viola! You get the most delicious and tender cauliflower curry.

Add olive oil over medium-high heat in a medium, heavy-bottom pot. Add the onions and saute for about 5 minutes until translucent. Add spices, stir for a few minutes to allow all the flavors of the spices to come out. Add all the remaining ingredients, stir well to make sure every piece of cauliflower is coated wit the sauce.

Put the lid on the pot, cook on low for 20 to 30 minutes on low until the gulpea can be easily pierced by a fork, stirring every 5 minutes. The gulpea has enough moisture so the bottom doesn’t burn, but if you find the sauce is drying up and you need a little more liquid, either add 2-3 tablespoons of water, vegetable broth or olive oil. If your gulpea is too watery, remove the lid and cook uncovered for another 5 minutes to allow the sauce to reduce. The cooking time will vary but you want the result to be fork-tender, but not mushy.

Serve with nan, pit bread, or challaw, the Afghan white rice. A dollop of plain yogurt makes a heavenly addition.

Except where otherwise noted, all content on this blog is licensed under the Creative Commons Attribution-NonCommercial-NoDerivs 3.0 Unported license.