As an Afghan Cultural Advisor for plays, TV and film productions for over 10 years I’ve worked on a variety of different productions set in Afghanistan. One of the challenges I face is finding trained Afghan actors with experience to play some of the roles and I’m often asked by Afghans “Why aren’t there any Afghan actors in this show?”

Well, this is our chance to get our community to get involved in this very popular TV Show on Apple TV called Little America.

This one episode show is about a young Afghan piano prodigy. It’s a beautiful story about how he became interested in music and how his talent brought him to the United States. This is a fictionalized version of a real story.

It would be wonderful to have Afghans cast for these roles so I ask your help to get the word out, let’s see some real Dari spoken on this show. The best part is NO EXPERIENCE is necessary. The casting team is very excited to work with the Afghan community to bring this show to life in the most authentic way.

So share this post with your family members, networks and in your communities. Whether you live in Virginia, LA, Toronto, Queens or the Bay Area it doesn’t matter. The search is being conducted in the US and Canada. Submission details are in the attached flyers in Dari and English.

We are looking for:

[10 YR OLD ZAHIR] character portrayed is 8 to 12 yrs old, Afghan, male. He lives in Afghanistan with his family and learns to play the piano despite the Taliban's prohibition on music. Speaks Farsi (Dari) or Pashto. Experience with piano a plus so please indicate if the actor plays and at what level.

[ZAHIR] character portrayed is 18-early 20s, Afghan, male. A sensitive piano prodigy from Afghanistan, unexpectedly trapped in NYC awaiting asylum, hasn’t seen his family or his country in over two years, and hasn’t been able to bring himself to play piano in just as long. Speaks fluent English but Farsi (Dari) or Pashto is his first language. experience with piano a plus so please indicate if the actor plays and at what level. LEAD.

[ZAHIR'S FATHER] character portrayed is 30s, Afghan, male. Seen in flashback, ZAHIR's father lives in Afghanistan, is an artist at heart, and helps his son pursue his passion for piano, despite the Taliban's ban on music. Speaks fluent Farsi (Dari) or Pashto as his first language.

[ZAHIR'S MOTHER] character portrayed is 30s, Afghan, female. Seen in flashback, ZAHIR's mother lives in Afghanistan, is fiercely protective of her family, and worries what the Taliban will do if they discover her son's music. Speaks fluent Farsi (Dari) or Pashto as her first language.

All Child Performers work under the guidelines of the State of California and the Screen Actors Guild. A child’s guardian or parent PLUS a studio assigned teacher will be with the performer at all times. Working hours are (length of and the amount of time they can appear on camera) per their age. A portion of their workday will also include school, with the performer bringing their assignments & studio teacher communicates with their school.  Child performer welfare is of utmost importance.

Also, please know that the role of the mother will be respectable. No nudity or exposure or giving birth. As it stands now, the mother will be seen in flashbacks around her home in Kabul, and then in Skype calls with her son once he’s in NYC.

CAST WILL BE PAID PER UNION RULES (EVEN IF THEY'RE NOT MEMBERS).

The show Little America is an American anthology television series produced for Apple TV+. It premiered on January 17, 2020 and it had such great success that a second season is being made which includes this beautiful story about the young Afghan Prodigy.

Let’s get together as a community and get the word out. Thank you. 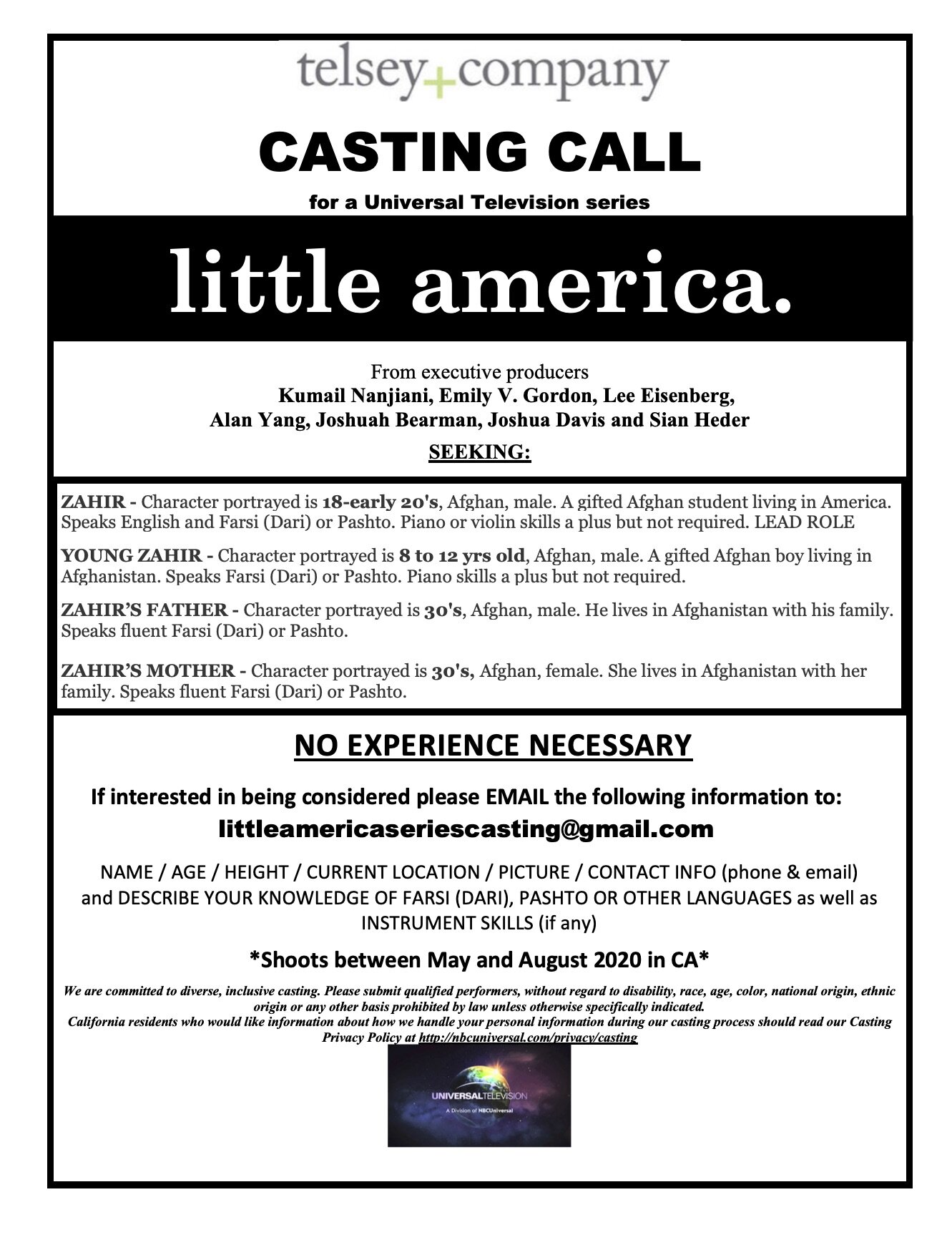 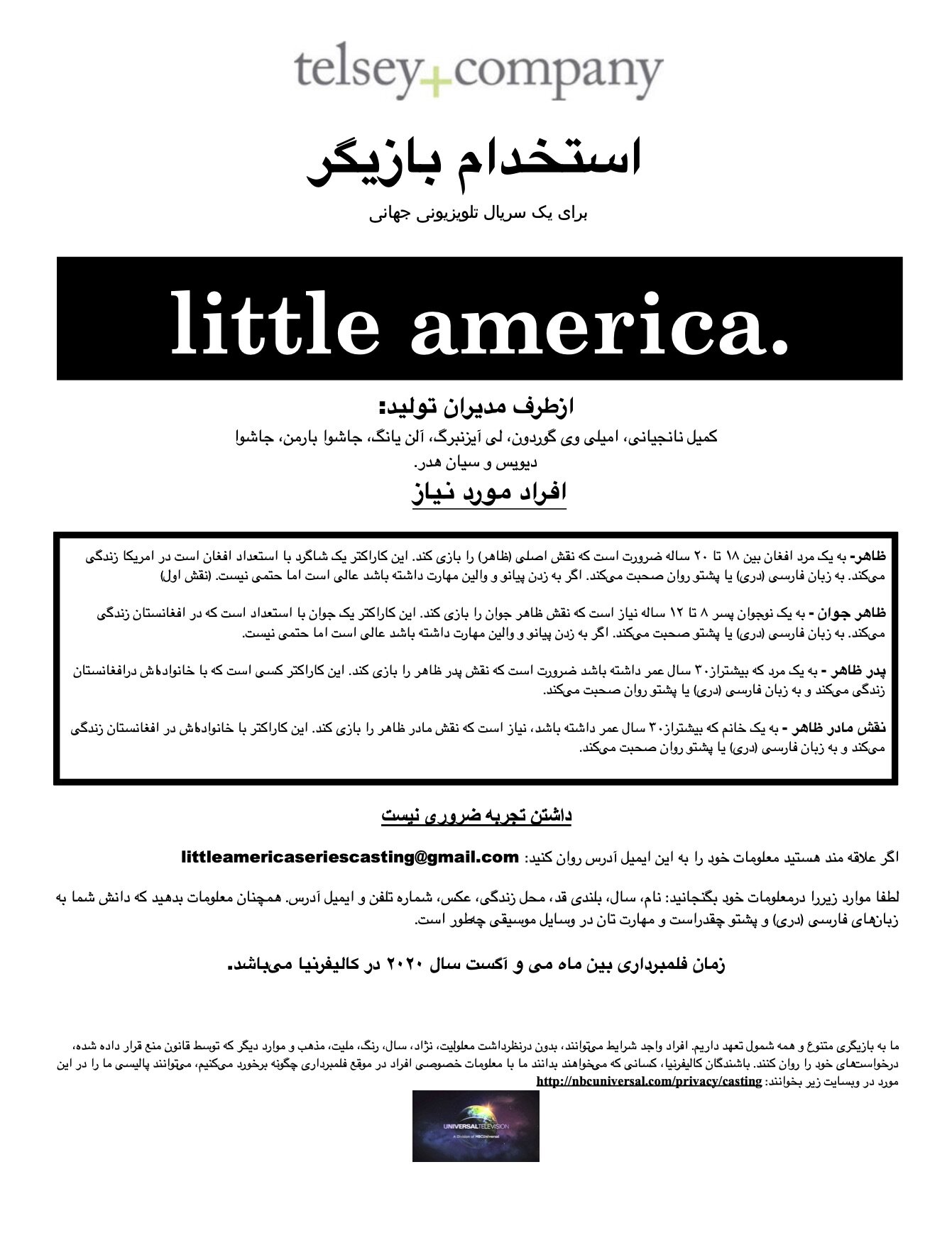 Source : afghancultureunveiled[dot]com
US confirms jet crashed in Afghanistan – but disputes it was downed
US and Taliban to sign deal paving way for troop pullout and peace talks