1.        Afghan Civil Society and pressure groups should immediately meet with UN office in Kabul, working on an urgent plan where the UN, international community and the countries with flows of asylum seekers must accept the asylum seekers without question, with the motto “The Migration Is My Right”, which is confirmed in Human Right Declaration.

3.        Suggest “One Soldier, One Refugee” agreement. In other words, any country which deployed army to the countries where from the asylum seekers are coming should accept one asylum seeker in an exchange to one soldier from those Western countries. Because such countries inflamed and mongered war in Afghanistan, Syria, Iraq and etc.

4.        Afghan civil society activists and organizations should contact with Western organizations, charities and influential people to provide shelter and food for the asylum seekers.

5.        Collect financial and non-financial assistance to the asylum seekers through public gathering, meeting with business figures and the central government 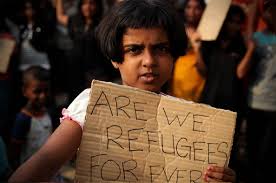